God is a Place 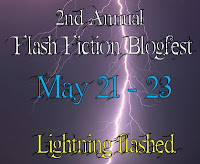 Lightning flashed. He waited for the crash of thunder, but it never came. He walked among the miniature tombstones searching for his daughter, carrying a dozen red lilies.


“I don’t want to go this year," his son told him this morning.

It broke his heart. He always envisioned her as his son’s partnered angel. She existed, sight unseen, looking over him, watching, guiding, protecting. She, above all, loved him.

He found her tombstone: Infant Williams. He regretted not naming her. Alexis he decided, two years too late. He knelt down, slid his finger over the grooves in the granite, and brooded. She would have been six today.

Tears flowed as memories flooded his mind. He remembered her birth. She was light as a feather. Her lungs pulled in a single breath. Her eyes opened, flashing a sea of blue. A holy spectacle, which he thought would last forever, lasted only for him. In his dreams, she was alive and crying.

She sat across the tombstone from him. Her legs folded, her head resting in her hands, she sank her deep blue eyes into his soul.

Don’t cry for me, father.

You will. God is a place. We'll wait for you there. She stood and turned, her wings folded against her spine. Don't worry about brother, I've talked to him. The wind howled, kicking up dead autumn leaves. She ran into the cold, damp air, and disappeared into the fading image of her mother.

He set down half the lilies and walked to the other side of the cemetery. Now he could hear the thunder.

(Inspired by the song Two Headed Boy Pt. 2 by Neutral Milk Hotel)
Many thanks to Cherie Reich for hosting this.

I read the Hunger Games just before the movie came out--late to the party as usual. I wanted to experience the phenomenon. I was not disappointed. I still haven't read the other two (or watched the movie for that matter). I'm on it this summer. The first book was good, and I was trying to pinpoint the exact reason why. There were some twists in the plot that didn't sit well with me, and the future itself seemed bleak and hard to believe. No, what made the story great were the characters. Every person in that novel is well rounded and magnificently presented by Suzanne Collins.

There are three people in the story that really stand out for me: Katniss Everdeen, the heroine; Rue, her ally in the games; and Caesar Flickerman, the host of the show.

Especially Caesar, the way she brought him to life, in the few short scenes he was in, was brilliant. He's such a minor character, yet Collins makes him real and multi-dimensional. It's worth studying how she did it.

As I rewrite, I can see that my characterization needs help. I have started studying character archetypes. Every story has them, whether planned or not. Even in real life, people fall into personality types, so it only makes sense that characters in stories should fall into some type as well. These literature archetypes are tried and true characters found in almost all good tales told in all cultures around the world.

Here are some resources:

45 Master Characters by Victoria Lynn Schmidt (I got this from my local library, a great resource)
Writer's Village University (detailed breakdown of popular archetypes and more)
Ageless Wisdom & the Hero's Journey (A website about mythic hero journeys)

My to A to Z experience was great. I feel like I actually produced something. As a result I have a web book, and an ebook, out in the ether. I don't expect much from it, perhaps some people may stumble upon it and find some enjoyment. Here it is:


I also made it into a kindle and nook book.

I will now put 90 percent of my writing efforts into my first novel (and 10 percent to my blog.)

Right now I'm trying to find a way to dive back into my novel, I think I'll do a rewrite from the top. The whole time I was writing this flash fiction, the story never left my mind. I have a lot of new ideas I have to incorporate. It is about a team of humans colonizing and discovering a new planet. I'll write more about it as it comes together. I'm shooting for an early 2013 release date, more about the story to come.

Thanks for all that visited and enjoyed the stories. Project complete.
Posted by VonLCid at 2:12 PM 3 comments

Finalizing my to A to Z Project

I'm doing a final read through as I self-edit my collection of flash fiction.  I have deleted errors, polished sentences and changed a couple endings, but mostly the stories are the same.

I will be uploading my epub and mobi files to the Amazon and B&N sites on Thursday. Along with that I  will be publishing the stories on a wix.com website (I will link to it from here). It's been a busy first week of May. 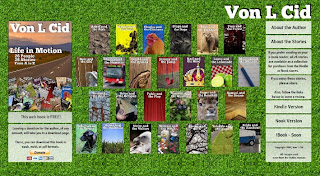 I work exclusively on Ubuntu (as opposed to Windows or MacOS). Of course all the self publishing guides I come across on the web are for Microsoft Word and Windows. I used LibreOffice for editing my book, saved it as an HTML file and am using Calibre to do the conversions. I used Gimp to create the cover and images, getting all photos from the public domain.

It has been a learning process, and I love learning. Making the ebook hasn't been hard, it's mostly been figuring out the correct formatting on LibreOffice that would give me the best conversion from Calibre. In the following weeks I'll be posting the major things I had to do to get it right, for my own future reference really, and maybe others will find it useful.

A to Z Reflection & Next Steps

Wow. I feel like I can breath again. The A to Z challenge was hard. Coming up with 26 different stories in the span of 30 days was difficult. I do like what came out though. I am quite proud of them (most of them).

I came across the A to Z challenge in the last week of March and I could not be happier that I participated and survived (did you see my blog badge?). I consider it a major accomplishment. After a month's worth of daily writing and rewriting, I feel like I am much more aware of my own writing and hope it helps me as I dive back into my first novel, which I will get back to upon completion of this flash fiction project.

I'm currently rewriting some of the early ones and will be posting them on another site (I think it's looking great). It'll still be free and I will be linking to them from here. I'll probably be taking the ones on here back to draft mode.

I'm also making them into an e-book to go through the experience of making a full self published work. I don't know if that's the proper path, or even if the work warrants it, but I'm working to that end. I want the experience of going through it. Formatting, designing covers (you can see the one I made to the right), rewriting, editing, etc. I am in full edit mode right now.

For the blog, my next steps are still being hashed out. I enjoyed the flash fiction pieces so much that I do want to do one or two a month. I will be working out a calendar to put them out in monthly manner. I will also come up with a calendar for my own blog hopping. I plan to visit and comment on all the people that are following (thanks by the way),  that will be part of my monthly calendar.

Great things are ahead, I'm glad to say.
Posted by VonLCid at 9:03 PM 3 comments