The first Monday of the month is Inpirational Monday. I blog about something that I find inspirational and keeps me writing.

I believe that all facets of life hold analogous traits to other parts of life. So a lot of times I try to find how my observations of people, places, and events line up with my writing.

As a huge fan of sport, currently I am watching the Olympics (as most people are). There are plenty of inspiring stories in these Olympic games, like there are every four years. This year though, there was one story that was unique. I was quite  inspired by the story of Oscar Pistorius of South Africa. Some know him as The Blade Runner, the first athlete with prosthetic legs to compete in any Olympic sport. 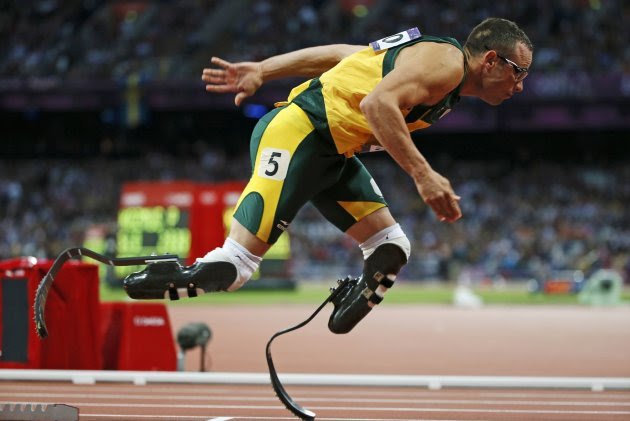 
Here is a person who was born with no fibulae. An entire bone was missing from both his legs, leading to their amputation before the age of 1. This is a pretty bad hand to be dealt if your goal is become an Olympic athlete.

I liken this to writing in that we all have certain creative abilities, and certain knowledge of craft. A lot of that is outside our control. Where you grew up, how you grew up, where you went to school, who your teachers and role models were. There are an innumerable amount of factors that have an affect on our abilities. I find myself frustrated at times by the limits of my mind, to the point of mental paralysis.

When Oscar Pistorius, decided that he wanted to run. He went for it. He didn't let a bad deal stop him. He played it well.

I just read that he didn't qualify for the 400-m final, in fact he came 23rd out 24 in the semifinal races. But it does not matter, he lived his dream. He was a runner who ran in the Olympics. I am a writer and I write.

I had a Linky List going for Inspirational Mondays, but Linky Tools has started charging for their services. So it's gone.
There are plenty of other Linking Sites that are free so I am using Simply Linked For Now.

What Inspires Your Writing? Join the List. Rules are you read to get inspired and comment on other's posts.